Cynthia Flood’s Notes on Making a Stone of the Heart 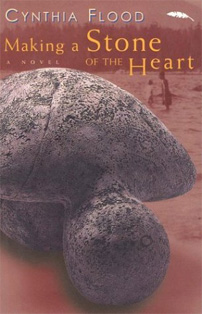 How did this novel come about?

In the mid-90s a member of Sex Death & Madness, a writers’ group I belonged to, brought to a meeting a clipping about a stone baby that a doctor had discovered in the abdominal cavity of an elderly woman patient.

Lithopedion: googling that will bring you abundant data. Stone babies are an oddity, all right, but with a long and well-documented history around the world. In the industrialized countries they are now rare, because of technological and medical advances. Still, every year or so there’s another story in some paper.

All of us in SDM were stunned by the physical facts, by the implicit metaphoric and symbolic values too. In response to that newspaper story we all wrote something — a poem, an essay, in my case a novel. It began as a short story, but the character who came forward was so private and inarticulate that other people were needed to mirror her and to provide commentary. In time, a quartet of voices developed.

Telling Dora’s story in reverse chronological order was important for me. An old person is stuck in a nursing home, shrunk small, ignored, unheard, but on her bedside table stands a photo of a strong young woman. A journey back through time to find her: this was the structure I chose. For a while I thought of dividing the book into four sections, one for each major voice, but concluded that this would be too much of a separation. A twined effect was what I wanted, the lives going in and out of each other. As a result, the book offers a rewarding but not an easy read.

Researching Vancouver’s history so as to present all decades of Dora’s life made the city itself newly real to me. At that point I’d lived here for nearly 30 years, but was learning so much I sometimes felt as if I’d only
just arrived.

The political history of Vancouver is also of great interest to me, but not to my characters. I had to be careful with that. They are shoved about and shaped and dominated by the political history of the 20th century, but they did not seek to involve themselves in it. They stay at the edges, the margins, and often want to get the hell away even from there.

Working with Key Porter’s designer, Peter Maher, on the book’s cover was very satisfying. I’d provided him with a turn-of-the-century image from the Vancouver Archives of children at English Bay (it’s in the background, at the top). Then Peter happened to see an ad for a sculpture exhibition by Susan Low-Beer, an outdoor installation called “Rocksbreath.” This was the source for the beautiful stone woman. It was a pleasure to meet Susan at her studio and see her marvellous work, and now in my study there’s a small version of one of her kneeling-woman sculptures.

In 2002, Making A Stone Of The Heart, was nominated for the City of Vancouver Book Award.