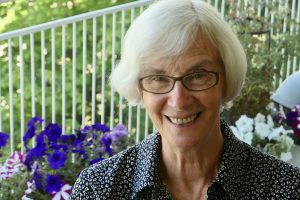 Born in 1940, I grew up in an academic/literary household where writing books was ordinary. Two childhood years in England gave me good “outsider” experience, as did the return to Canada, where I didn’t feel at home for some time.

For high school graduation we had to pick a quotation to go with our yearbook photo. I chose People say that life is the thing but I prefer reading. Adolescent sentimentality! Still, few experiences have given me such consistent pleasure over the decades.

Working life, 1961-2001; first, typing, with Dictaphones and carbon paper in San Francisco and New York. Later came book production departments with university presses in Toronto and Montreal. After moving to Vancouver in 1969, I found term contracts and, years later, a job teaching English and Women’s Studies at Langara College.

In the 1970s my two daughters arrived, and I spent much time/energy in political organizations, on the far left and in the women’s movement. These experiences fed my life and my fictions.

The Animals in their Elements appeared in 1987, followed by My Father Took A Cake to France ( 1992), both from Talonbooks. A novel, Making A Stone of the Heart, appeared in 2002 (Key Porter). I then focussed on fictions set in the UK, and Biblioasis published The English Stories (2009). In 2013 Red Girl Rat Boy appeared and in 2017 What Can You Do, both from Biblioasis and You Are Here in 2022.